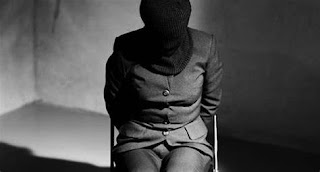 Marvelous Omobobola,who was reportedly an undergraduate of the Lagos State Polytechnic,  was abducted by a kidnap syndicate in the state, has been released after his family members paid N200,000 ransom.

Punch reports that the 28-year-old victim went to school on Saturday November 19, to sign a SIWES form. After he was done, the undergraduate boarded a tricycle to his hostel in the Odogunyan area of Ikorodu, Lagos State.

The 28-year-old while narrating his ordeal, said;

“I went to school on Saturday to sign my SIWES form because we were to start exams on Monday. When I was done around 5pm, I boarded a tricycle from my school to my hostel in Odogunyan. There was traffic along the way so the tricycle operator diverted into a street.

We were three at the back of the tricycle and one man sat beside the tricycle operator at the front. We asked why he left the road and he told us it was because of the traffic.

Suddenly, the tricycle operator parked beside a bus and some men with guns pounced on us and ordered us into the bus that was parked near a bush. We met some people on the bus when we entered it.”

He said the tricycle operator left to bring more victims, adding that the kidnappers seized their phones to keep them incommunicado.

“They drove us into the bush where some people visited to price us like goats. Some people among my group were taken away into a room where they were killed and well-dressed people came with coolers for their body parts.

When we were told to take off our clothes, one of the kidnappers saw the Celestial Church crucifix on my waist and he put me aside. He asked me what the crucifix was for and I told him I am from a celestial family.

He then returned my phone and told me to call my people to pay a ransom for me before their leader, one Alhaji, comes. He said when their leader returns, he would not be able to help me because Alhaji procures human parts for politicians and other people. He said I would be killed if he found me there.”

Using Omobobola’s phone, the kidnappers contacted his mother, Ronke, and demanded N700,000 ransom. The mother said she commenced negotiation with the suspects and they told her to choose between purchasing a coffin to bury her son and raising the money to secure his release. The kidnappers later agreed to collect N200,000 and after ending the call, the aggrieved mother was seen begging people including church members for money. She was able to raise N100,000 and sent it to her son's bank account.

“I am not myself as I am speaking to you. I heard the sound of people crying on the phone and my son said the kidnappers cut two people’s throats like cows in an abattoir. I have been told to send the N100,000 into my son’s account for his release.”

The kidnappers, after using his ATM card to withdraw the money from a Point-of-Sale operator, used Omobobola’s phone number to borrow N100,000 from online credit companies. It was learnt that the borrowed money was also withdrawn and the victim was released around 2am on Sunday November 20.

The state Police Public Relations Officer, SP Benjamin Hundeyin, when contacted, said the command was on the matter, adding that the culprits would be arrested soon.