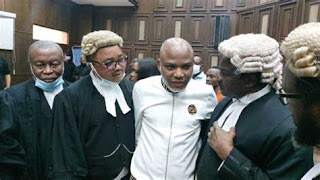 Trial of leader of the  Indigenous People of Biafra (IPOB), Nnamdi Kanu over terrorism charges brought against him by the Federal Government, has been adjourned indefinitely by a Federal High Court sitting in Abuja.

Justice Binta Nyako adjourned the case at the instance of Indigenous People of Biafra (IPOB),leader pending the resolution of the Federal Government’s appeal against the October 13 judgment of the Court of Appeal that discharged him from the terrorism charges.

Channels Television reported that two other cases billed for hearing before the court were also put off indefinitely for the same reason.

The judge was also told that Kanu refused to appear before her today, November 14. The Federal Government’s counsel, Mohammed Abubakar told the court that all entreaties made to persuade Kanu to have a change of heart were rebuffed.