Sad one!!
Simon Adokwu, a 100-level student of the Department of Social Work, Faculty of Social Science, slumped and died while playing football on the premises of the school in Akoka, Lagos State last Sunday, November 13. 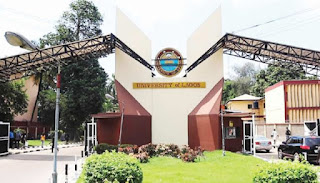 Late Adokwu who was a budding football star had gone to the field near the University’s Human Resource Development Centre to play football shortly after returning from church. He was playing ball with his peers when he suddenly slumped. He was immediately rushed to the medical centre where the doctor on duty confirmed him dead.

Confirming the incident, the University's Public Relations Officer, Alagba Ibraheem, said the other footballers claimed the deceased mentioned he was sick but insisted he will go ahead to play some football. She said his parents were alerted after the incident. She added that his body has been deposited at the Lagos University Teaching Hospital, Idi-Araba where an autopsy and post-mortem evaluation is expected to be carried out on him.

He ran a delivery business in the Akoka area to support himself through school.

May his soul ret in peace, Amen.